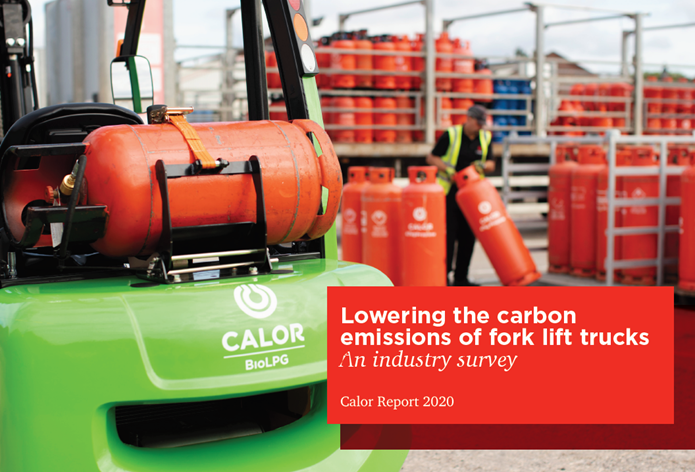 The British Industrial Truck Association (BITA) has welcomed the findings of a new report highlighting the need to reduce carbon emissions throughout the materials handling industry.

But despite the best of intentions, businesses continue to prioritise cost, fuel efficiency and minimising downtime over carbon reduction when choosing how their fork-lift trucks (FLTs) should be powered.

David Goss, Technical Manager for BITA, said while it was pleasing more UK businesses and industrial sectors were reviewing how their daily operations were impacted by the need to reduce carbon emissions, more needed to be done to speed up the process.

“The Government’s target to achieve net zero carbon emissions by 2050 has focused minds and it is incumbent on all organisations to seek out new, more energy efficient and less environmentally harmful ways of undertaking everyday business activities,” says Mr Goss in the new report’s Foreword.

Within the non-road mobile machinery sector, he said the focus of attention was how the materials handling industry could respond to the challenge of reducing carbon emissions and what role greener fuels could play.

Research completed for the new report shows 38% of FLT end-users coming under increasing pressure to reduce carbon emissions from their forklift fleets.

Mr Goss said the report was valuable because it sought to highlight some of the current thinking regarding issues faced by the industry, as well as providing vital insight into the thoughts and experiences of a range of FLT end-users in a broad spectrum of industries.

“Acting as an enabler for future discussions, BITA welcomes this report as a helpful addition to an important ongoing debate that is critical for the future of the FLT industry,” he said.

“At present no single dominant technical fuels solution prevails. This has resulted in the current balanced mix of existing technologies used by the marketplace. The case for the selection of either diesel, electric or LPG/biofuel power for FLT fleets is largely dependent upon several factors.”

He said each fuel choice had its own advocates, but the final purchase or equipment hire decision was currently influenced by a series of factors including economic and commercial viability, as well as operational suitability.

“BioLPG provides a ‘drop-in’ solution to immediately reduce a forklift’s carbon footprint without the need to invest in new equipment or technology; this is a step on the path towards 2050 net zero,” said Mr Goss.

BITA believes environmental considerations need to assume greater importance if the materials handling is to progress towards a greener, carbon-neutral future. There is already a groundswell of collaborative, industry-wide discussions and action plans underway to set out the issues and barriers to clean fuel adoption and begin to investigate potential solutions.

“Nevertheless, the UK Government needs to show strategic leadership on this issue. Industrial trucks have long experience of conventional internal combustion engines as well as alternatives such as battery/electric and hydrogen fuel cells (HFC), but without active involvement from the government, through infrastructure investment, support of technology/demonstrator hubs and the like, the commercially viable options available to end users remain limited,” said Mr Goss.

BITA is in active consultations with both the government and appropriate regulatory bodies to help inform and shape future policy decisions on the effective reduction of FLT carbon emissions.

“The road to net zero carbon emissions is a challenging one and the FLT industry is looking to the UK Government for strategic leadership to support all stakeholders as they continue to make meaningful contributions to the greener fuel and energy efficiency debate,” added Mr Goss.

He said it was only by better understanding the issues to be overcome that the materials handling industry could progress towards effective green fuel solutions that could satisfy commercial, economic, operational and environmental demands.

Steve Donaldson, National Accounts Manager at Calor, said: “Organisations that are scrutinising their whole value-added network are increasingly looking at how they and their suppliers can operate more sustainably. For materials handling operations, not only does this mean looking at lowering emissions of road transport, but also off-road machinery such as fork lift trucks.

“Reducing carbon footprint whilst remaining cost-effective and operationally efficient in such a competitive sector is no easy task. That’s why we wanted to better understand the issues involved, share the barriers to change and reveal the experiences and thoughts of FLT end users across a broad spectrum of industries. These insights would enable the materials handling industry to have more meaningful conversations about how to adopt low-carbon technologies and fuels for FLTs more widely, in ways which would satisfy commercial, economic, operational and environmental demands.”

The end-user survey, conducted by Censuswide in October 2019, interviewed 101 randomly-selected decision-makers and managers across the UK who are responsible for purchasing forklift trucks and their fuel. Participants worked in various sectors including logistics and warehousing, retail, manufacturing and healthcare, and the sizes of their companies ranged from firms with less than 50 employees to those with over 500.

Censuswide complies with the MRS Code of Conduct and ESOMAR principles.