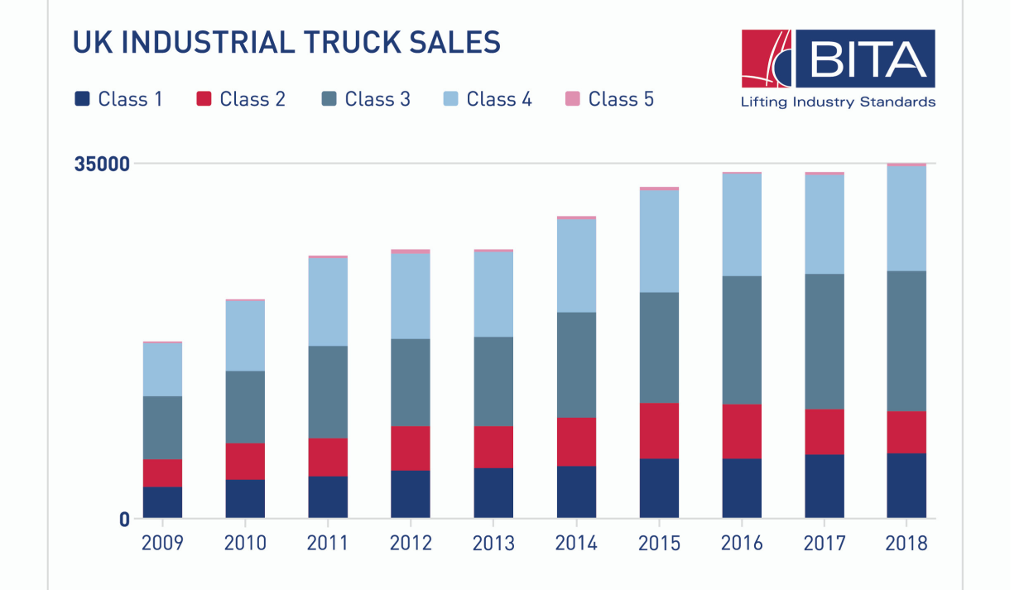 Following widespread predictions of a slowing in GDP, it is heartening to see the materials handling sector in 2018 performed above expectations. BITA recently released market analysis to their members, providing a crucial insight into the volumes of forklift trucks being sold across the UK during 2018. The figures show an overall rise of +2.5% to just over 35,300 units, with the manufacturing sector being the largest market.

Access to statistics and forecasts are key benefits for BITA members and provide anchor points for strategy planning – vital at times of uncertainty and when the economic climate is so clouded. Released twice per year, in late Spring and Autumn, BITA forecasts are conducted and authored by Oxford Economics, a leader in global forecasting and quantitative analysis.

Over the last ten years, the UK forklift market has risen dramatically from a low in 2009 of 17,658 units to 2018’s figure of just over 35,300 units. BITA forecasting has reliably predicted this trajectory across the decade and provides members with economic and industry modelling, market forecasts and analysis. Coupled with comment on wider business implications and identifying trends, the BITA forecast is an invaluable member benefit and is often used as a barometer to the health of the wider UK economy.

As this column is being written, the January BITA market analysis is being released to our members and will make interesting reading. Although the Bank of England recently downgraded its forecast for UK growth in 2019 from 1.7% to 1.2%, it did highlight that a fifth of businesses surveyed have increased their warehouse capacity as part of their contingency planning for a no-deal Brexit and concluded that the “fundamentals of the UK economy are sound.” In a global market where investment in capital equipment is often necessary to remain competitive, the current political and economic uncertainty makes justifying significant financial commitments very difficult. The opportunity arising for BITA members could therefore be in the short term rental market, as capacity is sought for the short term as part of contingency planning.

The BITA Spring Forecast, due for release to members mid-May 2019, is already hotly anticipated. Based on data to be compiled during Q1 2019, the analysis and forecasting will provide a fascinating insight into the UK’s economy during a period of economic and political uncertainty and turbulence, while providing members with solid data on which to base their plans for the second half of 2019.